In the past week or so, I’ve been experimenting with different editors for the multiple languages that I’ve been learning over the last few months. I’ve been working with a lot of Python for different projects in school and small projects on my own time. It’s one of my favorite languages, but I always felt as though the default editor (IDLE) was fairly barebones in terms of features after coming from editing Java in Eclipse and seeing all the different features it provided for the user. I then discovered, through word of one of my professors, Visual Studio Code. I am now switching to this editor full-time for Python, HTML, CSS, and hopefully Java eventually. I find that it is much more feature-rich than basic text editors and IDLE. I also really like the integration with Windows’ command line and the integrated terminal inside the app.

Aside from using different editors for all different languages, I also do a fair amount of text editing, especially considering that I made a fairly recent update to my Type Instructor that reads from a .txt file rather than hard-coded exercises. For editing random text files, I used to use Notepad++, which served me very well for the purposes I used it for, but then I realized that I could just use Visual Studio Code for that as well, and the few items I have edited in there have really worked out for me.

I’m hoping to bring my workflow completely to Visual Studio Code and use it as my full-time “Swiss Army Knife” editor for everything, including Java.

Since my last post I have made quite a bit of progress in regards to both my knowledge and progress on this project. Since the end of last year, I have gained much more experience in Java, while also learning Python, HTML, and a good amount of CSS. I have begun programming smaller applications in Python that I use for different daily calculations and small text-based games. These are mostly to help cement my knowledge of python and help me to learn even more. I have built a few small web pages, none of which have been fairly basic and I have left them unpublished.

The main thing I have done since last year is that I have started working on the actual typing instructor program. In its current state, the instructor is only programmed to teach the home row, but in the next few weeks I plan to finish up the alphanumeric keys so that someone that uses it will be able to learn how to type pretty much anything they would need to with little or no problem.

After I’m done writing the program needed to do the basics of typing, I plan to move on to use-case applications, like teaching a Java programmer the shortcuts they may need for their line of work, so they can learn these and know them by heart, rather than having to look at the keyboard every time they want to comment out a block of code. I plan to write this piece of the program for at least Java, if not Python as well.

Along with the language-oriented piece of my program, I will also add a menu to help a person pick up where they may have left off or to pick which language’s shortcuts they’d like to learn. This will also help to consolidate the system of running the instructor so that it can be ready for GUI and possibly web-based integration.

Progress on this project can be followed over at: https://github.com/channing173/Type-Instructor

As I move on in this project, I plan to keep investigating the different tutor sites that I have looked at in my previous post as well as keep going in learning the different programming languages needed for this program to function.

Things have started out slow, but I have been investigating more and more typing instructors throughout the past couple of months, getting a feel for how they function and what makes them accurate in how they teach a person to type on the standard QWERTY layout. Something that has also interested me in looking at these different instructors is what they are teaching you to type, whether it be a paragraph of nonsense, some random words, or for sites like typingcat, something that actually relates to your profession, much like what we are trying to do here.

I have also been slowly but surely moving forward in Codecadamy, finishing up the last couple of exercises before I move on to HTML5 and some more tedious languages like Javascript. This means that I should be able to investigate the actual programming that goes into typing tutor sites and figure out how to implement some of those strategies into my own personal work.

Last but certainly not least, I have been crudely sketching out some of my ideas for a GUI of sorts that could be used to represent the typing tutor we are trying to produce. The design I’m trying to work towards is fairly simple, but I think that a simpler design could make the program easier to navigate for someone newer to computers and doesn’t want to go through the hassle of trying to figure out a complicated program just to learn something like typing, which is one of the main audiences for the instructor. The last step of the process will of course be to implement my programming knowledge and build the program around this GUI so that it works as I have imagined it here, but that is much farther away, as I am only now learning the basics.

In the last two weeks, I must admit I haven’t made as much progress as I would’ve hoped for. I had a couple of midterms that I needed to study for, as well as a research paper that I’m currently working on as well. Even though I haven’t had too much time the last couple of weeks, I plan to double up and buckle down to get done what I need to in the next couple of weeks.

That’s not to say I haven’t done anything. I’ve been chugging along through the Python course in Codeacademy, in hopes that I will be able to expand my knowledge of programming languages and use it to create the type instructor, the main goal of this project. After I’ve completed the course in Python, I plan to move on to HTML and get that done by the next time I post. That way, I will have a couple of new languages down and can get some harder ones done from then on.

Over the past few weeks, I have also been using and analyzing different typing instructors and testers to see what they have to offer, and maybe to get some ideas of my own going forward. I have been investigating the design of the instructor, as well as seeing what kinds of features they may have to offer that could overlap with what we’re doing. This could definitely help give a point of reference for the new instructor based on the others already out there.

After going through about ten different instructors and testers, I started to notice a heavy trend throughout. Most of these have a fairly simple user interface, with a large block of text for the user to type, and a box below it to type in. Most of the testers have a clock to show the user how long they have left to complete the section as well. One other thing that was present in just about every program was that the text was highlighted in some way to show you what word or letter you were on in the section so you wouldn’t lose track.

One thing that I found incredibly interesting was the fact that one of the sites, typingcat, had a section specifically aimed towards different professions and languages. They also had different sections in the curriculum based on what you thought you needed to learn.

After looking at all of these different types of programs, I plan to move forward and start to sketch my own rendition of a typing instructor for our particular case scenario. This should help to form the basis of what the final product will look and feel like for the user, and combined with my new knowledge of programming, I can work towards making it into a reality.

My name is Channing Williams, I go to James Madison University, and am currently a freshman there. Since the summer before 11th grade, I was always interested in custom keyboards, how they work, and even how to build my own. I started out small, just slightly modifying my different keyboards, giving them different casings or keycaps, nothing too technical. As time moved on and I learned more and more, I started to desolder and resolder new switches, and even started doing small repairs on friends’ broken boards. Eventually, I built my first keyboard from scratch using acrylic, some wire, and a microcontroller. By doing this, I learned the ins and outs of programming a custom keyboard matrix using the C language, and after many grueling hours, was finally able to flash the layout to the microcontroller and get it working. Since then, I’ve built many, many keyboards, and furthered my knowledge even more. Over the past summer, I also made my own custom layout [see below] and went as far as to have it manufactured and sold to people worldwide 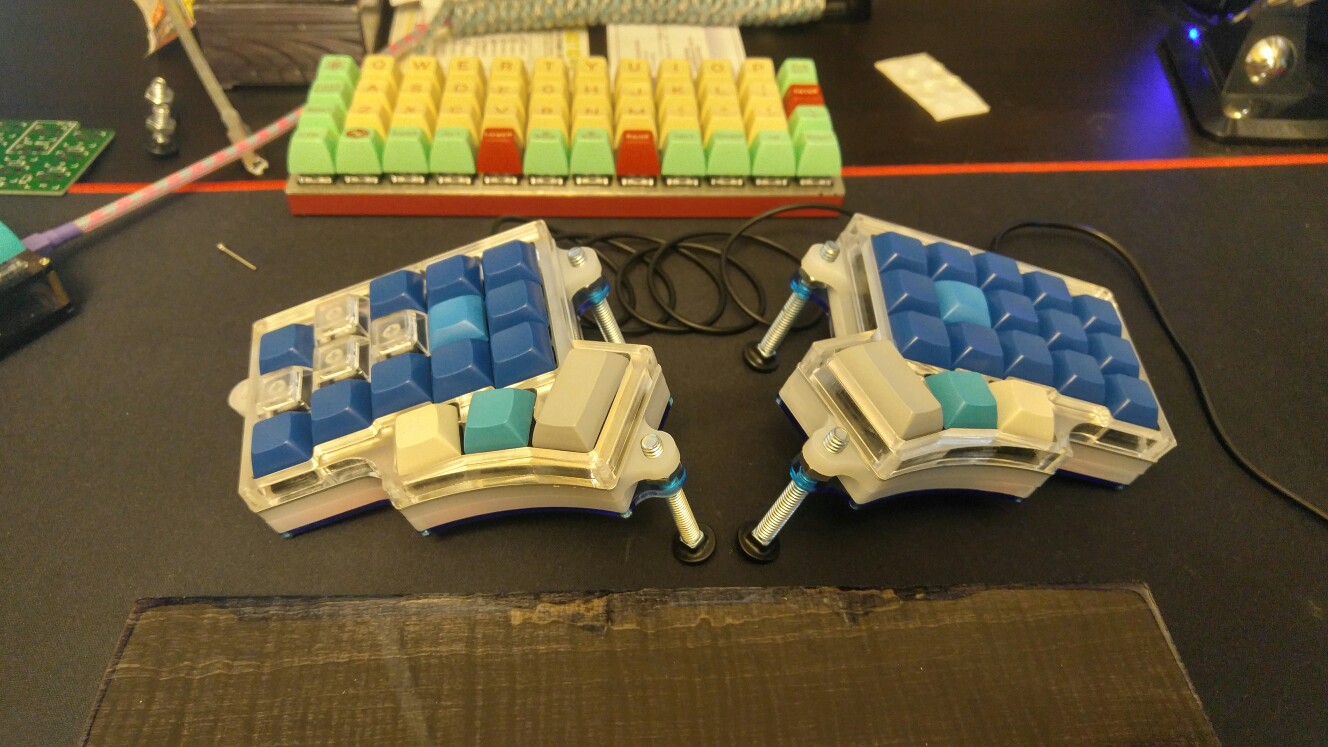 What I’m planning to do with this knowledge is to create a new kind of typing instructor that can adapt to the layout you are using. For example, the first keyboard below would have a completely different curriculum than the second, as they are drastically different layouts and therefore require a much different learning curve.

On top of that, people in different professions may require much different keyboard shortcuts based on their use case. The typing instructor will not only incorporate the normal words and phrases, but also include these keyboard shortcuts based on your profession. This will help to give the end user a much better understanding of what their keyboard can do, and will help them adapt to new layouts much better over time.

I’m Prof. Michael Stewart, an “HCIentist”. My research, teaching, and design for people in a world of technology are considered to be in the discipline of Human Computer Interaction (“HCI”).